Below is the code that needs to be place into the header of the site so that we can track and record the calls coming in.
About Us 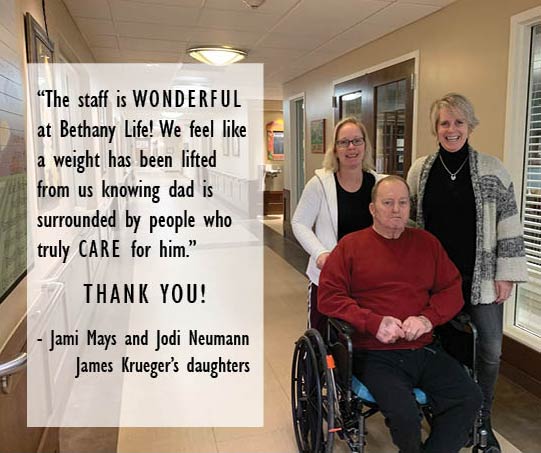 “Six months ago my mom’s life was altered when she was suddenly diagnosed with Lewy Body Dementia. This has been a living nightmare for her and our family. After a short stay at a private pay facility we moved her to Bethany Life & we couldn’t be happier with the transition! The administration was very helpful, kept in touch & held a bed for us for several days until Medicaid was finalized. The staff in mom’s house are kind & offer suggestions to help make her comfortable. And the receptionists at the front desk are so friendly & always have a smile on their face! I’m 100% thrilled with Bethany Life & highly recommend it!”

“In response to your family letter I wanted to share a special photograph I took in my yard last week.  It’s all I have to offer your staff to express my longtime deep gratitude for the care you have given to my mother, Emmy S.  Please do share this with everyone, and pass along my thanks and best wishes for strength and renewal!”

“ I know how difficult these days are for all of you not knowing what the tomorrow will bring but you are all caring givers of yourselves and passionate about the work you do and it is so appreciated.  Thank you all for being there for me and all you serve.  Stay safe and well.  You are all in my prayers.”

“We can’t imagine the stress you are under.  We are praying and we know you are there for us which is an amazing feat at this time.  Thank you, Austin, for dropping off the masks.  If only we could do more for you.  Tom said we will send a donation which helps but imagine you need manpower, too.  There are too many hurting people now and we know you are hurting, too.  God bless you for taking care of all of us and all your families.  Please, please take care of yourselves.  You are so needed.  We love you.”

My Journey To Independence

When Steve Gertsen came to Bethany Life in March of 2018, he could walk just 25 to 50 feet. He was close to needing hospice care. But now he’s walking many steps a day and has event moved into his own apartment at Cedar Place.

“He had a lot of cardiac problems and his blood pressure was really low,” said Kayla Haberl, a physical therapist at Bethany Life who has worked extensively with Steve. “Heart failure, heart attack, a-fib (atrial fibrillation), there was a long list of thing I had,” Steve said. “I almost died twice.”

At that time Steve needed assistance to sit up in bed, to stand, to walk. He initially came to Bethany Life for skilled care, then after a few weeks was moved to long-term care. He really didn’t think he was going to live much longer. In fact, his certainty that he was close to death is one reason that he chose to move to Bethany Life in his home town of Story City from where he was living in Missouri. 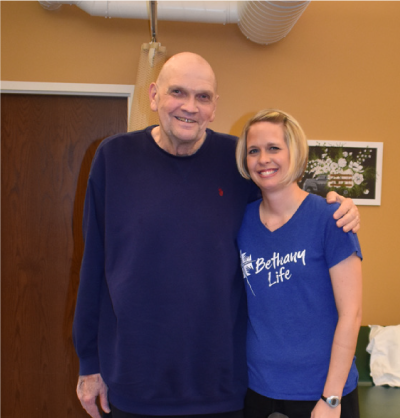 "Bethany gave me the opportunity to get so much farther. It extends a life, but more importantly, it extends the quality of life."
— Steve Gertsen

Remembering the Elderly With Help & love

“In the last couple of days, I’ve seen and heard articles on one serious problem in our country.  ‘Loneliness in elderly people.’  They urged everyone to remember the elderly with concern, help, love – anyway to help them.
As I heard these things, I see that is exactly what you all strive to do. Lots of ways to spend their time – crafts, trips, movies, exercise, games, hugs, smiles, and help whenever they need it.  What a blessing and thanks so much!”
– June VanLangen